Attention! This is a legacy build of the Mega Man RPG from 2019 and is no longer being maintained. Reported bugs will not be fixed and any progress made here will not be saved. Return to the archive index for more legacy content or play the current version of the game for all the new stuff.

Administrator
MegaBossMan
MegaBossMan
53,376,288 BP
55 TP | 1808 PP
Hi everyone!
It's been a while since I've done one of these threads, and just as long that we'd have had an entirely new feature to merit it, so please excuse me if this thread seems a little rusty... Some of you may have already noticed some of the new material in the past week, but regardless, we're highly excited to finally bring it out of beta and into the public leaderboard! Since you've already read the thread title, you certainly don't need me egging you on with hints, but this music might help set the tone somewhat...New Mode Unlocked : Endless Attack!

After extensive testing by our staff and community, the new ‘Endless Attack’ mode has been officially released! As an adaptation of the endless modes of prior mainline Mega Man games, Endless Attack has you marathoning waves of Robot Master foes in an effort to reach your top score! Your records aren’t just for show, however; your high score will add to your Battle Points total on the leaderboard, and you may find yourself competing with the top scores of other competitively-minded players. Your own personal records will be recorded for your convenience in your profile, but when hovering over the display of 'Endless Attack', you can also see who has the global record out of all Prototype players! While your initial battles may be brisk, the robot opponents will progressively become more and more difficult as you delve further in, growing in numbers, stats, elements, and Starforce boosts! The Endless Attack mode can be found and played in the Challenge Missions tab, unlocked once you’ve progressed into the post-game. Whether you’re playing for fun, to best your own record, or to achieve the global record against every player, the Endless Attack mode supports every style of play; make sure you log in soon and let us know of any feedback or bugs on the new mode!Mechanic Change: Hold your Pellets, Capsules, and Tanks! 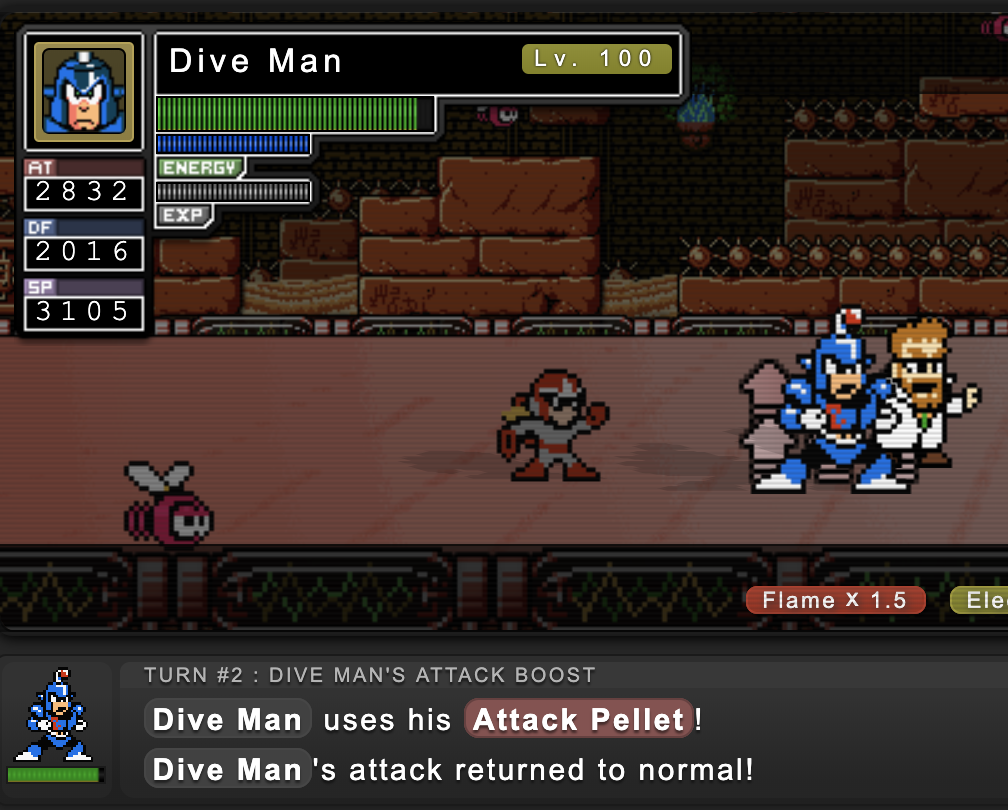 Balance changes have been made to the effects of various consumable items. When held, items that raise stats / energy will activate reactively based on the stats of the user; specifically, when the user is afflicted with a stat debuff. For example, holding an Attack Pellet and being struck with an attack-dropping move such as Bright Burst will cause the pellet to activate and neutralize the robot back to their original stat. However, the catch you'll have to be mindful of is that these items activate at a certain threshold: pellets will cover you the least but activate early, capsules will recover moderate drops and activate midway, and items like E-Tanks / W-Tanks will recover you fully but come at the cost of reacting only at desperate times. These factors are wildly different in comparison to the original implementation of these held items, so keep that in mind when updating your team!
Furthermore, you may have noticed that the leaderboards may have shifted around a bit. This is due to some noticeable changes in how items are calculated for BP. Originally, one would received a full amount of BP for each single item they owned. Now, a majority of BP earned is only gained from the first of that item; subsidiary amounts of that item award an additional +1 BP. This should alleviate the importance of items in calculations, and should make monotonous item-grinding a little less of a necessity for those interested in leaderboard playing.A New Enemy Robot Master: Ground Man! 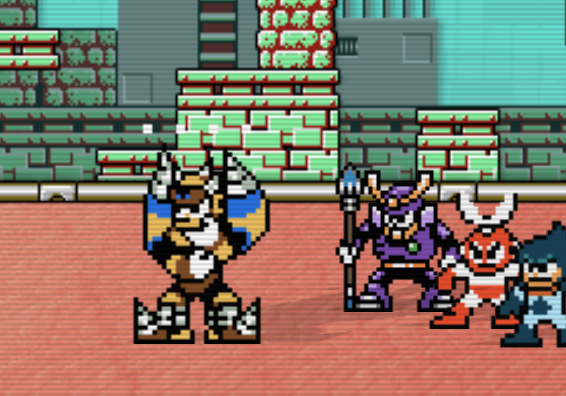 Ground Man, from 'Mega Man and Bass', has appeared suddenly as an enemy robot! He may not be playable just yet, but he'll still show up in Starforce / Bonus Fields in order to wreak havoc against any who stand in his way! His sprites originate from the Rockman FC project, and I handled some of his sprite editing and posing. He's not ready quite yet as a playable Robot Master, but as his sheet was already finished, I chose to quickly throw him in there as a bonus! If Ground Man happens to be your favorite Robot Master, I hope you enjoy getting to kick his can around!
As a side-note, Elec Man, Top Man, Dive Man, and Crystal Man have all had their sheets newly refurbished! A thanks to Rhythm_BCA, Brash Buster, and Beta Man for their work in the creation of these wonderful sheets! I'm obviously biased in saying so, but they all look so freakin' cool!

As an added bonus, the new technical ability “Item Swap” has been added to the game! The name says it all; like other swap abilities, this move will allow you to swap a held item with a selected opponent. Note that when using this ability with a support robot, you can even trade your items between your fellow teammates! When facing an opponent with an item you may want, this move should be invaluable in your tactical play and fills a niche that hasn't been explored yet in regards to abilities.Other miscellaneous changes include:
- Core Shield functionality has been revised. Shields last for 3 turns regardless of summon method. held cores give +1 duration to the relevant shield at end-of-turn.
- Swap Abilities now only increase their WE cost 50% upon each use (as opposed to 100%)
- Progress made on Endless Mode is now saved and recorded if you happen to exit or leave the Prototype window.
- Jewel Polish has been buffed to remove the Bass Crush and Crash Bomber abilities
- Hornet Chaser has been buffed to consume pellets / capsules / tanks immediately
- General stability updates and bug fixes

Other OTHER mechanics and bugs have also been addressed in this update, so make sure to take a look at our Github change log sometime!Comments, questions, and general feedback about the update can be posted below this thread.
For bug reports, typos, and other issues please post in the Official Bug Report Thread.

Hey there! Thanks for playing!
- MBM

I understand many certainly look forward to new content updates, such as new playable robot masters as was made clear in this thread, but at the moment we have nothing further to say; our main and only programmer and project lead has been going through some changes in the work environment, and as such hasn't had the available time to work on new content updates at his leisure. I've described it the same way many times before, but Prototype is at heart a passion project, and while it's satisfying to bring out new content and see players appreciate our work, passion projects can never be prioritized over our own work-life balance. I understand that it may not be exactly what everyone wants to hear, but we'd like to ask the community to give us some further time. We've never liked working under deadlines or constraints, so at the moment, please consider us under a bit of a break for now >_> Nonetheless, I'd like to thank our community so far for being as patient as they have been; your diligence has not gone unappreciated.

Though, in other ways, while I lack the skillset to create new abilities and features, I have been adding some new visual content to the best of my abilities. For example, as a late Halloween bonus, Pirate Man's sprites have been finished and can now be fought against in the game! I understand he's not playable and that may not be as exciting for everyone, but it's something and means that every Robot Master from 1 through 10 are now all represented in some form. I'll do my best to have more Robot Master revamps done as well to help make the wait more bearable!

Let's end the decade with a blast; a Blast Man, that is! Blast Man, the explosion artist robot from Mega Man 11, has now been incorporated as an enemy you can fight! His sprites were handled by Rhythm_BCA, and with such explosive flair it'd make Blast Man proud! The day hasn't arrived just quite yet where you can use him and his Chain Blast in battle, but in the meantime I hope everyone enjoys this last-minute gift and new entry. With him, there's only 3 Robot Masters left before we completely finish the Robot database. We're super close!

... Speaking of, I also haven't mentioned in a news post yet that Tundra Man was also added recently. His sprites were also done by Rhythm who worked super hard to get both these robots in before the year was over, so enjoy defeating both of these flashy Robot Masters together!

« Back to Home | Mega Man and all related names and characters are © Capcom 1986 - 2022. | Contact & Feedback | Data API
This game is fan-made by Adrian Marceau, not affiliated or endorsed by Capcom at all, and is in no way official. Any and all feedback is appreciated. :)